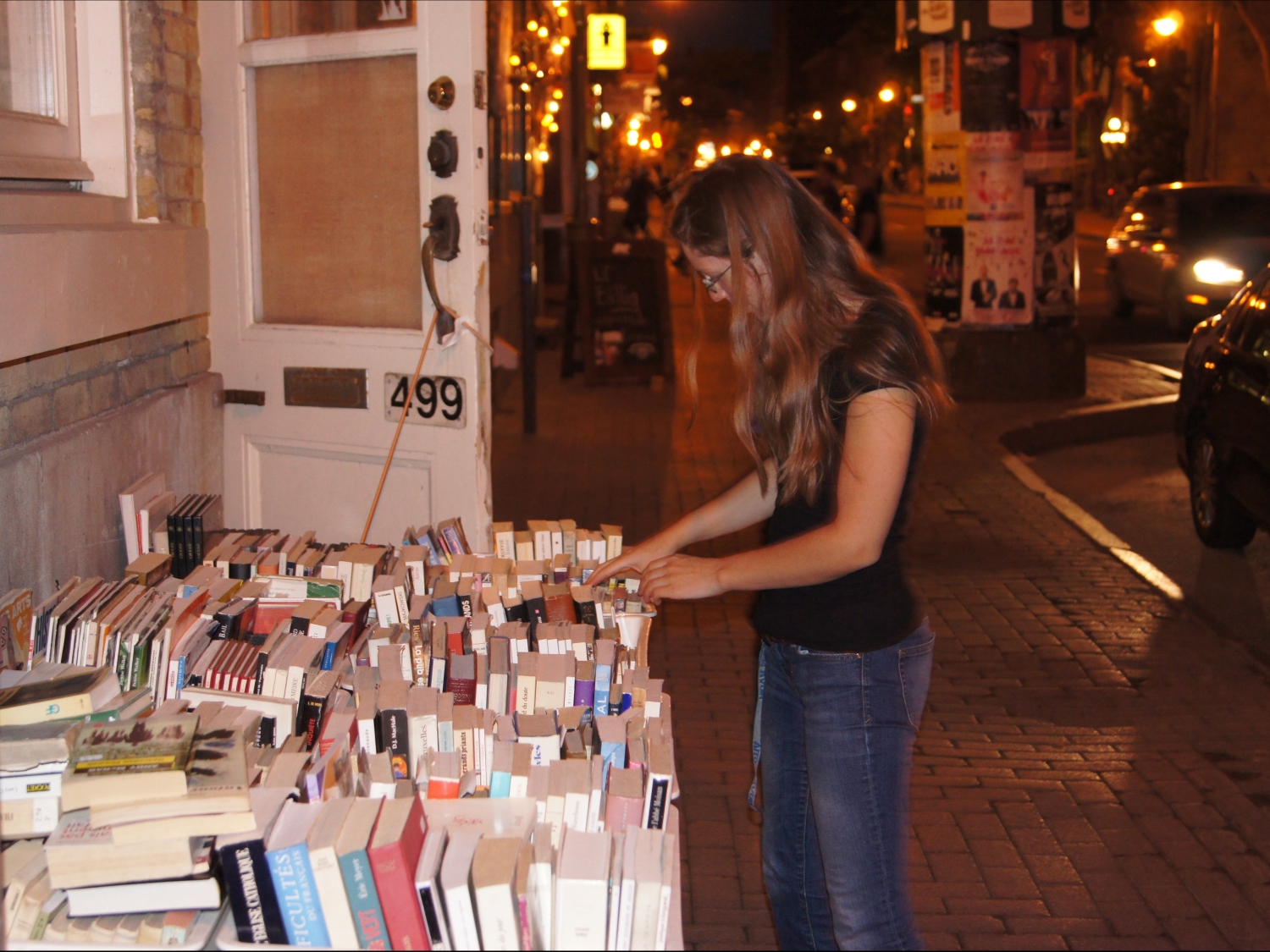 Excited, I took the bus yesterday morning to a used bookstore, and began wondering wherein lay its appeal. After all, I’ve spent quite a bit of time in used bookstores – shouldn’t the charm have worn off by now?

Not only did I work in a used bookstore for four and a half years, I’ve also frequented them myself often enough as a peruser, sometimes spending hours in them at a time.

But for some reason, the question of why going to a used bookstore is so appealing hit me harder yesterday than it had before, even more than when I wrote a memoir about working in a used bookstore. I suppose because now I’m writing from the other side of the counter.

So, what is the appeal of the used bookstore?

Perhaps it has to do with the idea of reusing an old thing – a practice some are squeamish about when buying clothes or cars. They want them new, pristine off the rack or lot.

I delight in the thought of using something previously owned, so long as it’s in good condition (whether that’s clothes or cars or books).

I’ve become a discriminating used book buyer over the years. No musty smell or torn or missing pages for me! – no matter how attractive the edition may otherwise be.

I can usually determine the quality of the place I am in within a few minutes, just by randomly opening a paperback, flipping through it for highlighted or penned passages, smelling a hardcover for must, or observing the overall quality (and price) of a familiar edition. Sometimes, I’ll luck out and find a genuine treasure in an unlikely place, like a thrift store. But that generally takes a lot of looking and luck. I frequent most often those places where I’ve silently noted the proprietor’s judicious selection.

I like the charm of the used book. Its old book scent, the feel of its pages, the inscription on the front flyleaf of its previous owner. Pencil underlines and notes in the margin. The markings of a well-loved book by a genuine book lover.

I like to know that someone owned the volume before me, touched each page as they read, kept it on a shelf somewhere else. And, like any used-article store, there’s much more variety, and possibility of surprise in a used bookstore, where unalike items are friendly neighbours living side-by-side, rather than cloned duplicates of the exact title and edition, strategically stacked at the  big box stores.

In frequenting the used bookstore, there’s always the sense that you never know what you may find there. It’s the appeal of the unexpected.

Titles and editions from your past may unexpectedly emerge, particularly when these are children’s books, or books you’ve previously misplaced. But don’t go specifically on the look-out for these: like some magical creature, they’ll never appear (or very rarely so) when you’re looking for them.

That’s why it’s best to approach the used bookstore with an openness of what it has to offer, rather than with an expectation for it to fulfill a specific (and arbitrary) desire. But you must have an idea, although vague, of what you hope to find.

It works best if you have an accumulated list of general interests, stored in your mind. And any particular titles and editions to be accessed instantly by memory. You are always on the lookout, but you’re never quite sure what you’ll find.

There’s always a sense of serendipity when you find the book you’ve been searching for for years. In a way, it’s as though the book’s previous owner, the proprietor, and bookstore have all been working together for this very end. How fortunate that you happened to go to the bookstore on that very day, looked on that very shelf, and beheld the treasure that was there.

And perhaps that’s what makes the appeal of the used bookstore so strong: when you do finally find that book you’ve been on the look-out for for years, you have the sense that that particular copy was waiting just for you.

Question: What is the appeal of the used bookstore for you?