Last week while browsing online, I stumbled upon a photograph of stacked books, spines facing the camera straight-on. Curiously, the books’ edges were not flush with each other, but ragged. This struck me as both strange and intentional.

This wasn’t the work of a seasoned photographer going for a natural look of offset books, nor was it a novice’s failed attempt at putting books in a neat pile.

No, this was something different altogether, something I couldn’t put my finger on. It was somehow vaguely familiar yet unidentifiable. Stumped, I clicked on the image.

This, it turned out, was poetry.

I have been thinking lately about the ways in which book titles often play off each other. I’ll sit in my office with my books in the background, and absently read their spines when I’m supposed to be writing.

I can’t help but notice how Ann Patchett’s This Is the Story of a Happy Marriage pairs so perfectly — so obviously — with Joey Franklin’s My Wife Wants You to Know I’m Happily Married. There is too much in common between the two of them to not, well, marry them together: similar titles, each consisting of a complete sentence (a rarity in book titles, I’ve discovered), and each naming a collection of personal essays.

And yet, there are other books which have seemingly little to do with each other that still, from my vantage point, seem to play off each other: The Primary Colors, The Red and the Black, The Yellow Wallpaper, Volkswagen Blues, Blue Nights, The Rainbow. Reading the titles alone, anyone can see the obvious correlation of colour.

The more difficult task is to disassociate the titles from their authors, genres, and contexts in order to pair them, titles of: personal essays on colour associations, a French psychological novel, an American short story about an insane wife / woman / writer, a contemporary French-Canadian novel, a memoir of loss by Joan Didion, a “scandalous” novel by British modernist D.H. Lawrence.

Yes, I must forget what I know about the books in order to bring their titles together in this way.

In the picture of stacked books I saw online, the edges were ragged so as to allow the titles — which appeared on various places on the spines — to line up. One title below the next could be read. Combined, these titles created vertical poems. They formed meaning.

In the poetry word, this form is called “found poems,” — “prose text or texts reshaped by a poet into quasi-metrical lines” the Poetry Foundation explains.

If found poetry consists of taking existing text and reorganizing it, then I was looking at book title found poetry. At least, that’s the term the particular blogger used to describe her creation: new meaning of a book title created from the context of another stacked above and below it.

Finding book title found poems (a fairly clunky wording, I admit, for a kind of poetry, but as I’ve struggled to come up with an alternative name I’ve come appreciate the direct, if unpoetic, description) gave me a way to express the pairings I’d already discovered on my shelves, and allowed me to create new ones.

One of the biggest challenges I had in creating them was, as I wrote, to see the words of the title alone, without their context. I wrote that I had to forget. But, perhaps I have to remember it all, acknowledge the strange juxtapositions of the book titles, and pair them anyway.

It occurs to me that essays do much the same work as book title found poetry: not in  forgetting the context in which we find things, but rather, in identifying and plucking seemingly disparate experiences, thoughts, examples, etc. and pairing and placing them together in a new context to form something new. Components of essays play off and speak to each other and create new meaning in ways that they never could do if left in their original context. Essays allows us to see anew something that is familiar, whose meaning had perhaps become commonplace.

As I’ve considered how my book titles might stack up together, I’ve come up with some surprising and (I think) hilarious combinations. I do not claim to be a poet. In fact, I’m sure that the poetic decisions I’ve made in my found poetry might be rightly contested by those who know the craft well.

Like the blogger I stumbled upon, I’ve decided only to only use book titles found in my home. I’ve restrained myself from adding verbs, except for an “is” in two instances (side note: there are relatively few book titles with verbs in them, and very few with only a verb as its title!). I’ve also inserted a preposition here or there, or an article, to help the meaning along. Other than that, I’ve kept the wording pretty much to the titles on the books themselves. I’ve created my own line breaks, which goes against my inclination to leave them at the end of almost each book title. I’ve also supplied punctuation. (In many ways, I feel more like an editor than a poet!)

Below are six attempts at my very own book title found poetry, which I have renamed “found poetry on my bookshelf.”

I’ll let the poems speak for themselves.

After Montaigne, the portrait
inside my head is
stirring the
Mud

Where I Was From the World is on Fire

Where I was from the world is on fire:
the waste land
holy land
land of promise

Away! the gift
of good land

marvel before
the door
of God

Between You and Me

Between you
and me, my wife wants you
to know I am happily married.
This is not a novel: this is
the story of a happy
marriage 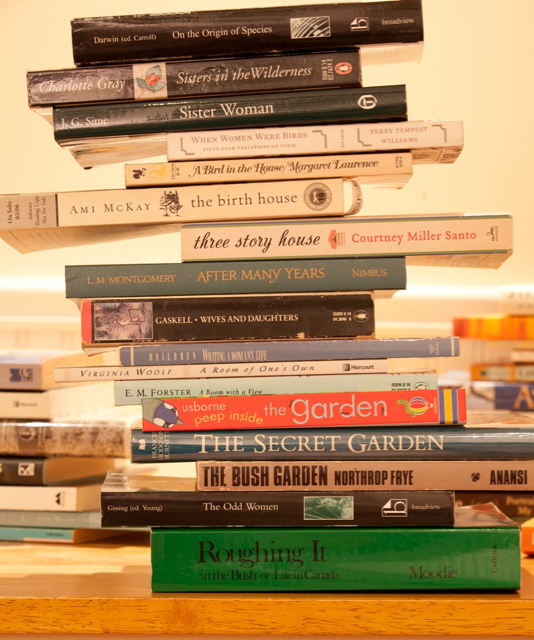 On the Origin of Species

Sisters in the wild-
erness,
sister, woman,
when women,
were birds

A bird
in the house,
the birth house, three
story house

After many years,
wives and daughters, writing
a woman’s life
in a room
of one’s own, a room
with a  view

Peep inside the garden,
the secret garden
the bush garden:
the odd women, roughing it
in the bush 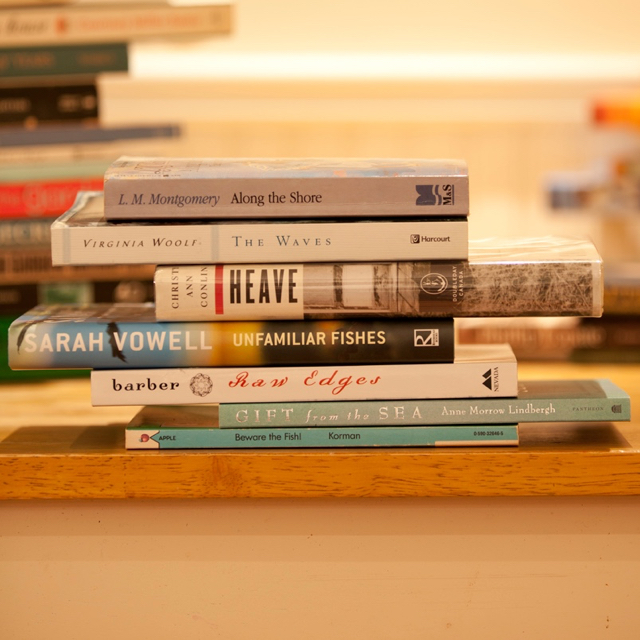 Along the shore, the waves
heave
unfamiliar fishes
— raw edges, gift
from the sea.
Beware the fish!

In short, the death of Adam is an
apology for idlers,
playing in time

Question: What “found poems” can you discover on your bookshelf?