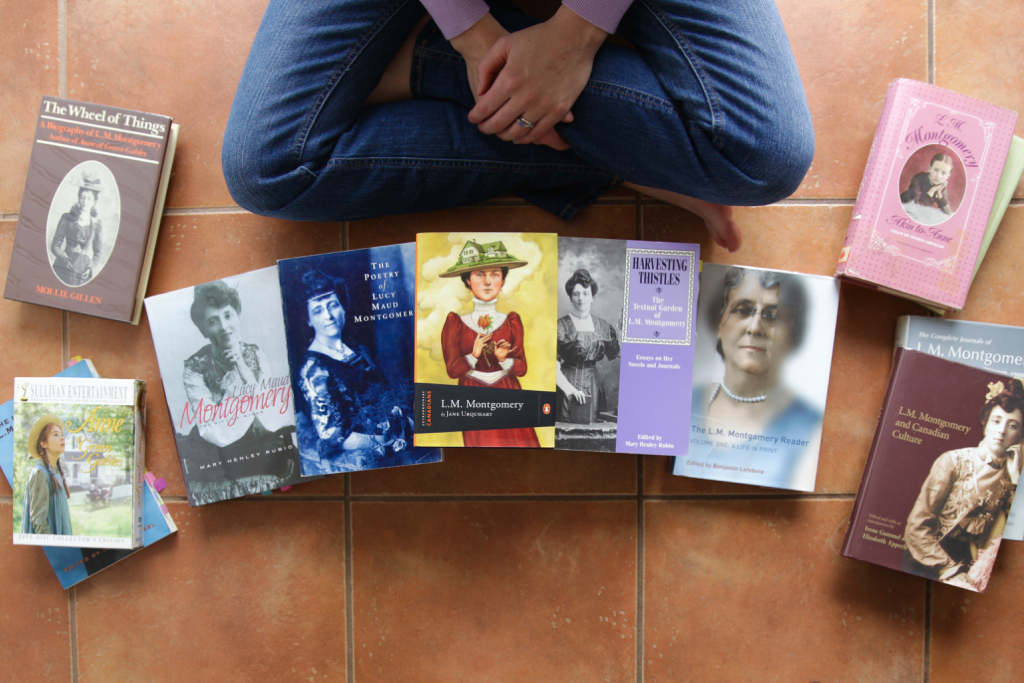 I have been thinking recently about L.M. Montgomery, on the occasion of her birthday, which was last week on the 30th of November. She would have turned 143.

I received several reminders of her anniversary that day, the first through an LMM blog which I subscribe to. “Given that today is the anniversary of L.M. Montgomery’s birth in 1874, it seems fitting . . .” the post began. And I wondered about why we commemorate people — writers, specifically — in this way,

At which point, I recalled a couple of years ago waking up to discover that Google had remembered L.M. Montgomery on November 30th by creating an animated Google Doodle. The Montgomery Google Doodle, by Olivia Huynh, featured Anne Shirley, the heroine from LMM’s most well-known novel, and the one for which Montgomery became famous: Anne of Green Gables. I was pleasantly surprised to see this, I think because I didn’t expect Google to care about the writer in this way, and with a reach that went well beyond Montgomery’s Canada, and extended to over a dozen countries worldwide.

As I look up the Google Doodle now, I discover the year it was posted was 2015. Why 2015? It was 2008 which had been the significant year, marking 100 years since Anne had been published.

In a fit of curiosity, I decide to look up significant events in Montgomery’s life in 1915, and discover that that year she gave birth to her third son and published her third “Anne” book. Both important milestones in her life, they nevertheless do not seem to warrant a reason to honour her in 2015 specifically, and I come to the same conclusion I had two years earlier: the year was purely arbitrary. Rather, it was the date, her birthdate, that mattered.

Another reminder of her birthday this year came in the form of an email from the L.M. Montgomery Institute with the subject, “Celebrate Maud’s 143rd Birthday by Registering Early for the L.M. Montgomery and Reading Conference,” with little party icons before and after. Again, I was pleased: how clever to align the announcement of the early-bird registration for the LMM conference with Montgomery’s birthday like that.

I have not yet registered, but I will. I’ve been to several previous iterations of this conference, held biannually on Prince Edward Island. In fact, I’ll be there this summer presenting a paper on Montgomery and the personal essay, something which she is not widely known for, but did indeed write.

As I scroll down the conference’s registration form, I notice there is a pre-conference creative writing workshop, and my mind is pulled from wherever it was before this email (attempting to write a blog post, no doubt). Instead, it’s swept away to a similar pre-conference writing workshop, several LMM conferences ago, during which I shared what I’d written in response to the given writing prompt with a small group of women. They were so encouraging and generous in their praise and excitement over my piece that it made me think that, maybe, others might enjoy my writing, too.

In recalling this, I realize that Montgomery had an impact in my life, even in this indirect way: because of LMM, I was there for a conference, took this workshop with other Montgomery fans, and received the gift of encouragement from them about my writing. At the time, I didn’t know I needed this, but it would later prove invaluable for me, as I would think back to it with a boost of confidence when applying, with hesitation, for a MFA in creative writing several years later.

And then my mind returned to years before that, as I thought about the other ways in which Montgomery has influenced my writing and my life.

First, I was introduced to Kevin Sullivan’s 1985 TV mini-series Anne of Green Gables and decided — I think before I could read — that I, too, wanted to be a writer like Anne Shirley. In early elementary school, I began reading all the Montgomery books I could, borrowing muted-coloured hardbacks from the library and saving my allowance to purchase the pastel paperbacks from the local bookstore at $3.95 apiece. (I still have them.)

I reflected that I probably went to school on the East Coast in part because of Montgomery, which is probably a silly thing to admit, but it’s true. Most of Montgomery’s novels are set on the East Coast, and Montgomery herself lived much of her childhood and youth there: I suppose, in a way, I wanted to experience it for myself. When someone there mistook me for being from “the Island,” I took it as a compliment.

Later, in my Master’s in English literature, I wrote my thesis on Montgomery’s Selected Journals. What revelations they were to me, so different from her novels.

But these are all professional influences on my schooling and career.

I was also influenced by reading Montgomery in much more personal ways.

Like how, in my own undergrad, I returned to reading Anne of the Island, Montgomery’s novel about Anne attending university and living with a house full of girls while I was living similarly. This marked the beginning of my re-reading Montgomery’s novels, even as my own life coincided with those of Montgomery’s heroines.

Or how during a six week cycling trip on the West Coast in my twenties, I picked up an old copy of Emily Climbs from a second-hand bookstore and read it on the road. After re-reading Montgomery’s Künstlerroman of Emily Byrd Starr, writer, I decided, shortly after getting back, to write my own book (which I did).

And when my life trajectory didn’t turn out how I hoped or thought it would, I deliberately re-read The Blue Castle when I was single and the same age as Valancy Stirling, Montgomery’s heroine who was, at twenty-nine, still unmarried.

Last week on November 30th, later in the day, I would see post after blog post pop up about Montgomery’s birth. And I thought, well, why not? L. M. Montgomery probably has had more influence on me as a writer, both indirectly and directly, than anyone else. Why not celebrate her birthday?

The theme of this upcoming conference is “L.M. Montgomery and Reading.” The paper I’ll give next summer will be an academic one, focusing on Montgomery’s creation and craft of her own personal essays.

But today, I wanted to share some personal thoughts about L.M. Montgomery and reading. And so, I decided to celebrate / honour / remember her by writing this personal essay, and acknowledge the ways in which I’ve been influenced because she was born.

Question: Which writers have had a profound influence on you?